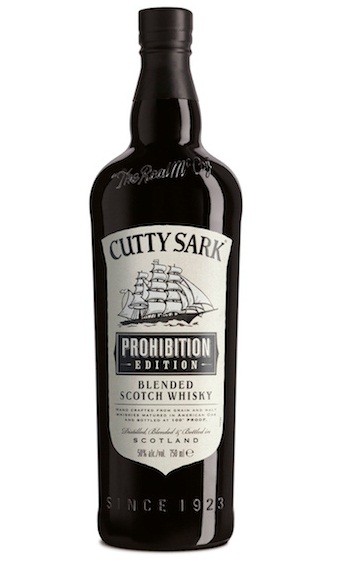 I have always had a soft spot for the Cutty Sark, since their entry-level offering was my bargain bottle at the local university liquor store. This new release is a bit like running into an old friend years later and reveling in her successes. Cutty Sark Prohibition Edition ups the ante on proof and flavor without breaking the bank.

The  blend takes its name from distillery history. When Cutty Sark was founded in 1923, the distillery was able to get off the ground despite the "noble experiment" taking place in America at the time, due in no small part to the efforts of outlaw bootleggers. Even the bottling of the whisky is a tip of the hat to the necessities of the time—it's a jet black bottle obscuring the nature of its contents from prying eyes, which is just as well, because I don't intend on sharing.

As with most blends, the malts included are shrouded in mystery. Cutty Sark only states that their blends contain "mostly Speyside" whiskies, but it's widely suspected that Glenrothes forms the base of the blend, with some Macallan, Highland Park, and others rounding out the rest. It's bottled at a robust 100 proof and non-chill filtered.

This whisky has quite a powerful scent, with sweet honey and vanilla taking the edge off an oily, earthy booziness. There are robust malt aromas as well, like deliciously fermented biscuits. The flavors are quite strong: malt takes the lead, but it's grounded by bitter citrus, tea, and a little dry smoke. It finishes light and warm, with hints of barrel spices.

I like Cutty Sark Prohibition straight up and full strength, but this whisky is also the perfect candidate for an Improved Scotch Cocktail.

On shelves crowded with blended Scotch, Cutty Sark Prohibition positions itself at an interesting price point between budget blends and premium blends, but manages to compete with the big boys. Listing for $30 a bottle, it's cheaper than Johnnie Walker Black or the Compass Box Blends, and comparable in price to Pig's Nose or Famous Grouse Black. The one caveat is that despite its strength, it is a lighter style of Scotch, so if you're used to the peat bombs from Islay, you should stick with Johnnie Black for that peat kick. But the high proof and complex flavor profile make Cutty Sark stand out head and shoulders above the pack.